Power's back in Aussie's hands

Mr Havard is one of only 15.2 per cent of the suburb’s homeowners to opt for a solar system, and in his case, with the latest in battery back-up. “I had to do something,” Mr Havard said. 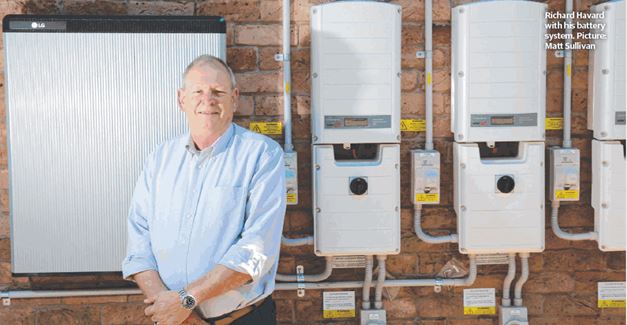 “When I first put 27 solar panels on the roof of my home I could get 60 cents for every kilowatt exported to the grid and annually it meant my power costs were pretty much neutral.” When the time came to renovate his house and put an extra storey on, the selfemployed plastics trader who works from home decided to go all the way.

He installed a 60- solar panel set-up and linked it with the latest in battery storage technology — two LG Chem batteries to store the power produced by the panels for use during the evening and night. “I had a system previously, a 5kW system, but then I decided to renovate my house.

When I put the original panels on six or eight years ago, the rebate meant I was pretty well neutral when it came to power use. “In spring and autumn I’d generally get a credit (from the power company as he fed unused power into the grid) and in summer and winter I’d pay a small amount. But over the year it evened out.

“When I decided to carry out a restoration and put a second storey on the house I decided I needed a bigger and better system. “I got 60 panels, which gives me 15kW of power, three inverters and two batteries. If the power cuts off, the inverters switch over and I’ve still got power, so no blackouts.”

Mr Havard said. “I’ve got a large pool and quite a few appliances, so I’m a large consumer of power. My bills can be around $500 a month.” Mr Havard would not be drawn on the price of his system which, given its size, is at the top end of the market.

But according to Ashleigh O’Brien, Business Manager of Bradford Energy, who supplied Mr Havard’s system, for most households a solar system need not break the bank. “A 4.3kW system with solar panels and an LG Chem home battery will come in at around $15,000.”

Ms O’Brien said. “Or you could start by putting on a 3kW solar system for around $4,000. “An increasing number of people are turning to the solar and battery solution — we have seen a threefold increase in business since last year — and if you go with a battery and 5kW solar array that will save around $2,300 per annum.”

Ms O’Brien said the cost should be recouped within seven to eight years on saved power bills.