In a project delivered by Council’s Logan Water Infrastructure Alliance, Australia’s leading battery and solar provider, CSR Bradford, has installed the first off-grid system powered by Tesla Powerpack products in Australia for any application. The project has already delivered the Logan City Council a capital cost saving of $1.9 million and operational cost savings valued at almost $50,000 per year.

The Tesla-supported micro-power grid and electro-chlorinator will provide around the clock solar-power to help maintain local drinking water quality 24 hours a day. Up to 200,000 people will benefit from the solution by the time the region is fully developed.

City of Logan Mayor Luke Smith said innovation was high on Council’s agenda and Council was committed to leading by example and turning words into action.

Mayor Smith said the 20 Megalitre Round Mountain Reservoir was brought into service in 2014 to provide drinking water for residents in Flagstone, Yarrabilba, North Maclean, Spring Mountain and Woodhill.

“This is set to be one of the fastest growing areas in South-East Queensland over the next two decades but with that growth comes the issue of building assets larger than are needed right now,” Mayor Smith said.

“We were concerned until demand increases, water stored in the network may age and not stay at the highest possible quality.

“We decided there was a need for a dedicated water chlorination station at the reservoir.

“The reservoir site is not connected to mains power or accessible via a sealed road so an innovative approach was required to maintain water quality from the reservoir.” 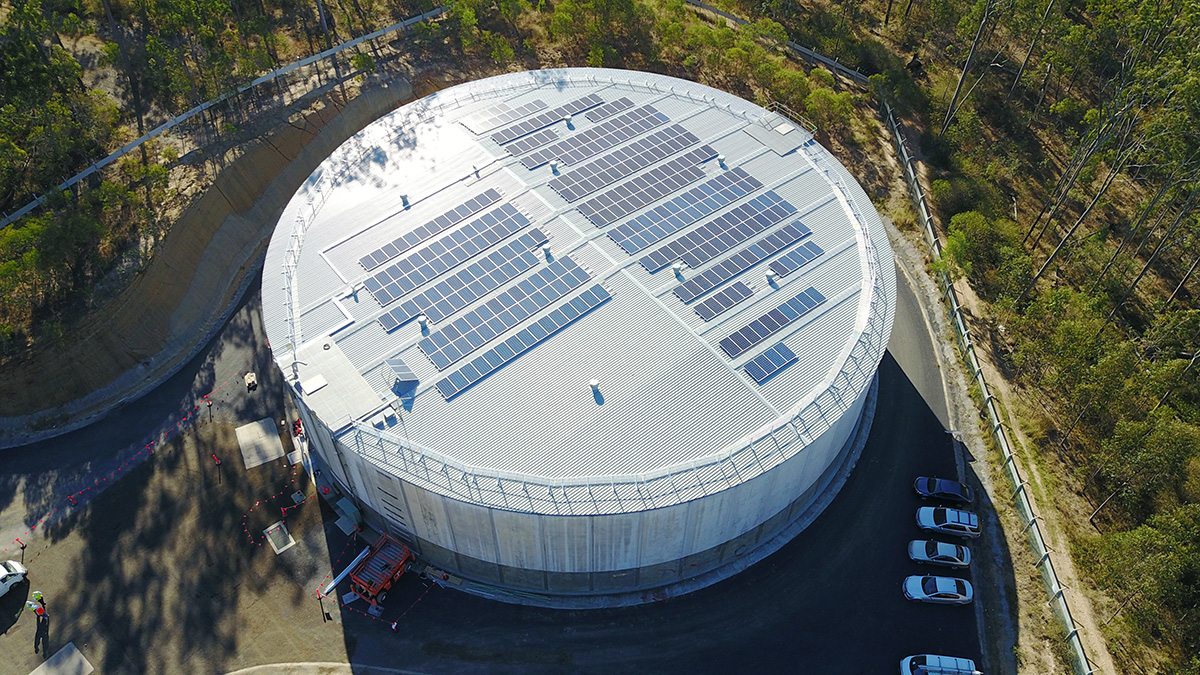 Mayor Smith said a number of options were investigated, with a solar powered electro-chlorination facility confirmed as the preferred technology and CSR Bradford was engaged to supply and install the system.

“CSR Bradford is incredibly proud to be playing its part in providing a solution which will see solar and battery technology play a greater role for commercial assets” she said. “The electro-chlorinator is powered by 323 solar panels (87kW PV array) and a 95kWh capacity Tesla Powerpack, that will help provide water quality 24 hours a day”.

“With commercial power prices soaring and homeowners increasingly struggling to pay their bills, CSR Bradford stands ready to demonstrate how improvements in battery technology and solar can empower asset owners, bring down prices, and safeguard them against the risk of shortages in the electricity market.”

“The project involved the Bradford team working with Tesla to design and install a solar PV and commercial battery solution which will work harmoniously in response to the site’s real-time energy requirements, and its success signals further potential to roll this technology out across the country” 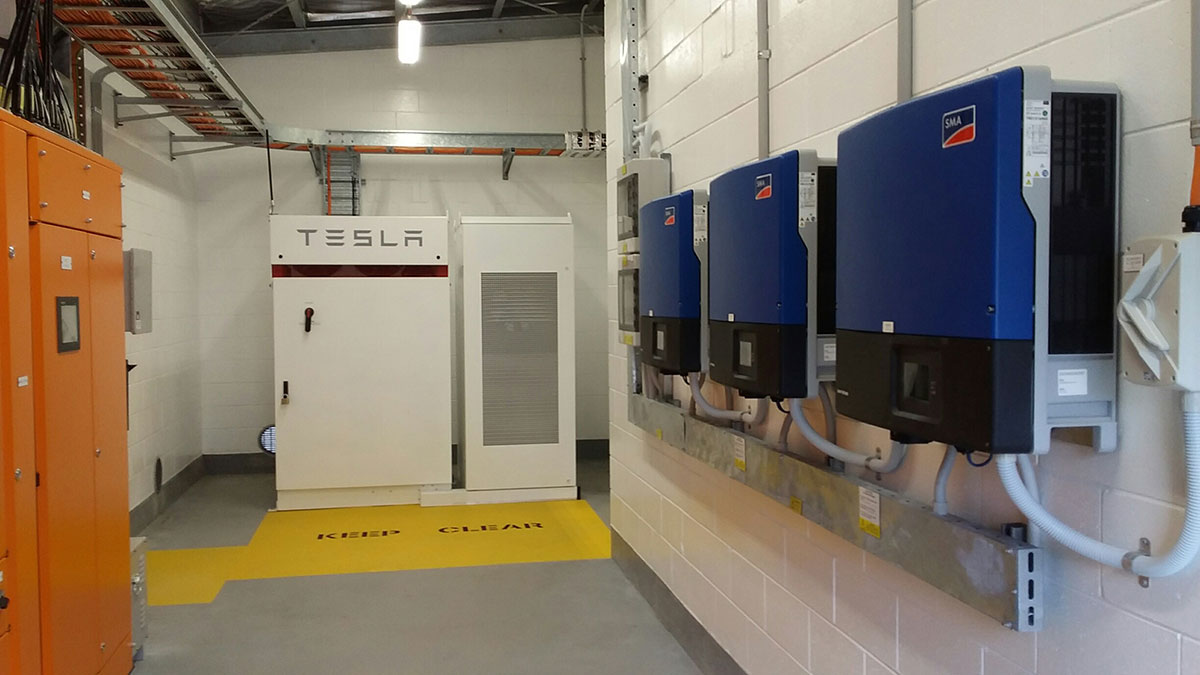 In a bid to help new home buyers address the issue of rising energy costs, eligible Designer by Metricon customers were incentivised to choose a Bradford Solar ChargePack upgrade, with the chance to win a Tesla Model S electric vehicle.

29 June 2018 - Australian families are turning the tables on their electricity bills and even getting their power for free. Last year Bradford Energy partnered with A Current Affair and ran our solar giveaway competition, providing five lucky families with 5kW Bradford Solar ChargePack’s, which each include a Tesla Powerwall.

Metricon partners with Bradford Energy to launch homes of the future

Sydney retiree Barry O'Regan says his 7 kilowatt Tesla Powerwall battery unit is working so well - allowing him to cut his energy usage by 25 per cent to 30 per cent - that he's planning to upgrade to bigger unit.

While the price of battery storage units have not dropped in Australia as quickly as expected, it hasn't stopped the rapid uptake of the new technology as households and businesses attempt to cut their large power bills.

Power's back in Aussie's hands

Mr Havard is one of only 15.2 per cent of the suburb’s homeowners to opt for a solar system, and in his case, with the latest in battery back-up. “I had to do something,” Mr Havard said.

12 July 2017 - Fairfax. A FAMILY in south-western Sydney has become the first in the state to install a new solar home energy solution – the 5kW Bradford Solar ChargePack including Tesla Powerwall 2.

Michael D'Angelo said he and his wife had moved to solar in 2010 due to the generous rebate of 60c per kilowatt and the opportunity to lower their electricity costs.

Even as Australia’s large-scale solar market starts to hit its straps, much of the talk at this year’s ASC Solar and Energy Storage Conference in Melbourne remained focused on the nation’s household market – an unstoppable residential shift to solar and storage that is currently being re-energised by some of the highest electricity prices in the world.
find out more

Battery storage to be standard in all newbuilds

20 March 2017 - Solar and battery storage will be included as a standard feature in all newly built houses in Australia within just a few years’ time, a key solar and building industry player has predicted
FIND OUT MORE

Lyndon Rive, President of Tesla Energy Products, made the claims yesterday when launching Tesla’s second-generation battery storage solutions, Powerwall 2 for domestic use, and the high capacity Powerpack 2 integrated system for business and industry, both with integrated inverter.

22nd February 2017 - Believe the Hype: Australia's uptake of solar home batteries is eye-watering. For quite some time many had dismissed the hype about the attractiveness of installing grid-connected batteries in Australia.

The first national audit of batteries that store solar power shows almost 7,000 were installed in Australian homes last year — and that's predicted to triple this year.

09 February 2017 - South Australia's economy is at risk because of the unreliability of energy supply the government has warned.

"Power in South Australia is more akin to what you would expect in a backpacker's hostel in a third-world country." "We cannot rely on the power supply in South Australia not to go out"...but there is a solar energy solution and it's available right now.

Innovative clean-energy technology allows consumers to have a choice and take steps to decrease their power bills and decrease their reliance on the grid.

Bradford Solar's BackUpPack including Tesla Powerwall can help Australians maintain power during a black out.
find out more

Tesla's Powerwall 2 can pay for itself in 6 years, then its electricity is free

When Tesla released the Powerwall 2 a few weeks ago, the game had changed. It had more than twice the capacity - 14KWh - and the price had come down to just over $10,000.

Michael Vorsterman, Western Sydney computer store manager calculated it would take between six and nine years to pay off - and ordered one for delivery in February to store power from his 4KW of solar rooftop panels.

23 November 2016 - In an Australian first, Arden Homes are including the innovative Tesla Powerwall 2 home battery (aka the Bradford Solar ChargePack) in all of their new builds, transforming the industry’s approach to home energy supply. This leap forward for the new build market offers homeowners the ability to enjoy significant electricity savings by harnessing guilt free day and night solar power.

29 Oct 2016 - Tesla have unveiled their next generation Powerwall in California.

Tesla’s new Powerwall 2 is the next step in a comprehensive approach to green, all-electric power delivery. This updated home battery is similar to Powerwall 1, in that it’s a large, rectangular (now with more rectangularity) device designed to live on a wall in your home (likely in the garage or somewhere similar) – but the big differences are on the inside.
find out more

Australian Financial Review - Oct 31 2016. Tesla's new beefed-up Powerwall battery system can offer Australian homeowners a potential saving of up to $2100 a year in electricity bills. CSR Bradford has partnered a number of builders to provide battery systems in new homes, including Gemmill Homes in Western Australia, Arden Homes in Victoria and Mojo Homes in NSW.
find out more