Sydney retiree Barry O'Regan says his 7 kilowatt Tesla Powerwall battery unit is working so well - allowing him to cut his energy usage by 25 per cent to 30 per cent - that he's planning to upgrade to bigger unit.

While the price of battery storage units have not dropped in Australia as quickly as expected, it hasn't stopped the rapid uptake of the new technology as households and businesses attempt to cut their large power bills. 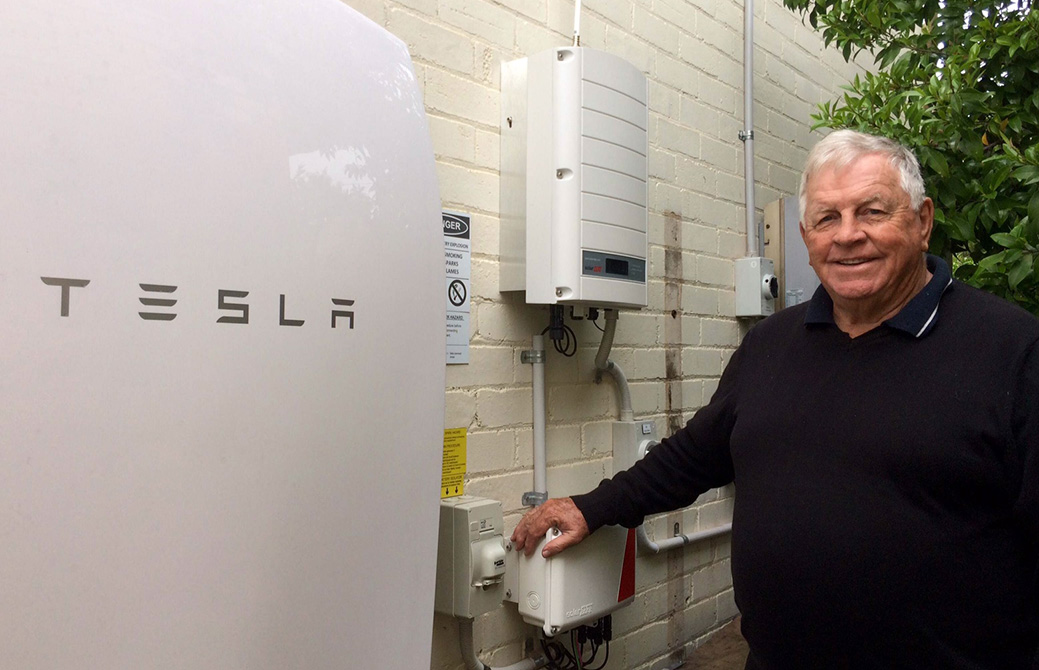 A new report by solar consultancy SunWiz released on Wednesday found more than 7,000 home battery systems (with a total capacity of 55 megawatts) were installed in Australia in the first half of this year - a figure that is expected to more than double in the second half of the year to a total of 17,500.

The forecasts for next year are even brighter with growth forecasts of up to 250 per cent. NSW is the number one battery hot spot in the country, with 21 per cent of installations this year alone, followed closely by Queensland (18 per cent) and Victoria (12 per cent).

Mr O'Regan had already installed 3 kilowatts of Bradford solar panels at his home in Kensington, in south-east Sydney, where he lives with six adults including his wife, his son and his girlfriend and another couple. But he decided to upgrade his solar to 7 kilowatts and install battery storage to get more bang for his buck.

He said it had been worthwhile to install the battery which charged first thing in the morning during off-peak times and was topped up with energy generated by his 22 solar panels during the day. But he finds he runs out of home-generated power by about 8.30pm to 9pm.

"I did have solar power in so I decided to fully utilise the power by putting a battery in. But it's too small so I'm probably going to upgrade that now too," Mr O'Regan told The Australian Financial Review.

"I still pay significant power costs - because the price of power has gone up - but this has helped. I probably should have put in a bigger battery I suppose but they're pretty expensive so that's an issue. But it's great to be able to monitor how much energy you're using and how much energy you're generating."

The cost of installing solar panels and a battery can set back households more than $10,000 depending on the deal they can cut with their retailer or if they decide to purchase them outright off wholesalers.

While the cost of solar panels has fallen considerably over the past five years the costs of batteries has not yet followed suit.

Another concern for Telsa users, including Mr O'Regan, is those wanting to upgrade will have to purchase the new Powerwall 2 because it is not compatible with the original Powerwall units.

"It's left me marooned a little bit," Mr O'Regan said.

The SunWiz report found that prices for batteries had fallen since the start of the year, but only by about 5 per cent, with the big players Tesla and LG Chem fighting for market share.

"In many cases the price fall has come from wholesalers due to increased competition resulting in margin-squeeze," the report said. "This price fall isn't substantial enough to accelerate the market [ie won't access mass-market uptake]."

The report found the payback for a small battery to be about 10 years, but it could be as low as six years in some states and territories like Queensland and the ACT where power prices are high and feed-in tariffs (money paid to put extra energy back into the grid) are more generous.

SunWiz founder and report author Warwick Johnston said many people were holding fire on purchasing a battery until the price point dropped.

"We are already seeing extraordinary growth in the Australian battery market despite little change in the price point, with a doubling of the market already appearing locked in this year on top of a 13-fold increase in 2016," Mr Johnston said.

"Once we hit a tipping point in payback time, the sales of household batteries will skyrocket - becoming as common as the backyard swimming pool is today in the years ahead."

Meanwhile, a new report to be released by federal Energy Minister Josh Frydenberg on Thursday has identified 22,000 possible sites for pumped hydro projects in Australia. The report by Australian National University researchers admitted the sites - which would have energy storage potential of about 67,000 gigawatts - had yet to be tested to see whether they were commercially viable.